It was a machine that the heroine fell in love with ── «Jumbo»  starring Noémie Merlant in «Portrait of a Lady on Fire»  is a love story of  “object sexuality” inspired by a true story. How did the movie director Yurina Kaneko, who drew a lot of attention with «The Sleeping Insect» , watch this film?

I have been dating Kamo River; a river is located in Kyoto Prefecture. The air of Kamo River that entered through my nasal cavity fills my body and makes me feel I’m likely to turn over from the inside and become a field. I love it. It was time that I was wondering if partnering with someone changing the floor plan, increasing the layer of time, and making someone part of the routine. If so, I thought that I could get along with Kamo River. However, the frequency of conversation with Kamo River did not match, and I had no idea what I was thinking. On the contrary, he was kind to everyone, so it wasn’t easy to build a relationship. We broke up in two days.

If you turn over the leisure sheet, which has a history of heteronormativity, you would find various flowers in bloom and graffiti drawn on branches. I would like to imagine that there is much such scenery. For example, object sexuality.

«Jumbo» is a love story about humans and amusement park attractions. Meet, fall in love, play, have sex, quarrel, get over… Object sexuality lives in such a universal drama composition.

The heroine, Jeanne, seems to be scared of humans. Because of fear of contact, she wears a hood to protect herself when she feels her gaze. She seems to be open to minerals. She listens to the stones she picks up at the bus stop. She forgets to eat, and her appearance is openly immersive in making miniature playground equipment in the amusement park where she works.

A spinning attraction called “Move It” is introduced in the amusement park. Although the customers have a bad reputation, Jeanne is fascinated by its appearance. She names the attraction “jumbo” and wipes it gently every night. And it was also the work of infusing “soul” into inorganic substances.

One night, when Jeanne is relaxing on the jumbo, she slips and almost falls. Then jumbo begins to move on its own initiative, landing her safely. Jeanne enters the control room and notices it’s off. Jumbo neon is reflected on the glass of the control room, and the two of them overlap. Its soul was infused by Jeanne literally saves Jeanne’s life. When she leaves the control room, when the person who controls the machine leaves the area, the film becomes the first shot from a jumbo perspective, and the two eyes meet. Time to fall in love.

Noémie Merlant, whose passionate performance in “Portrait of a Lady on Fire”, is wonderful this time as well. Her earnestness to squeeze “if this isn’t love” to her mother, who doesn’t show her understanding of her sexual orientation, made her love real from fantasy. Also, the performance of the attraction that plays the role of jumbo is wonderful. A red lamp that flashes softly like tapping Jeanne’s shoulder, a hazy voice that screams and hurts, a bouncy laugh, a request, a cry, and a busy emotion with colorful neon lights and sounds. It is performing well.

The sound of the film was also interesting. Her house is filled with electronic sounds mixed with the sound of insect wings, and mechanical sounds are flowing with a presence like a stream. Jeanne is surrounded by an inorganic voice, as we are surrounded by the sounds of nature. This film carefully expresses such a world only for her with sounds and images.

Her mother and others dismiss Jeanne’s sexual orientation as “disorder” and “abnormal.” It’s pathetic. If people don’t understand it, they try to classify it like that and put it in words. Because they are afraid they don’t understand. Still, Jeanne asks for communication to explain her love. However, her mother refuses it and tries to change Jeanne violently. She destroys the time when Jeanne carefully crafts a miniature. Jeanne is pained and jumps out of her room, forcing her mother’s body to stretch in her living room, and she said, “Does it hurt?” This scene could be my favorite part of this film. It’s a little ridiculous, but Jeanne’s pain is transmitted side by side with her feelings. It hurts so much to force her to stretch her streaks, and I’m not too fond of it.

Hubert, her mother’s new lover, appears as a person who opens a wind cave in a stuffy city. He suddenly arrives at her mother’s bar and answers “forgot” to the question, “Where are you from?” He later became Jeanne’s only comprehension. The morning Jeanne has sex with Jumbo, she is afraid of her anomaly because of the unshakable social eyes. But, where does the idea of abnormal come from? As he understands her from outside her city, it may not be possible to see her outside.

I’m completely left behind the acceleration to the last scenes of heterosexual marriage. But I think it’s okay to be not able to understand, it means I don’t have to understand. By watching this film, I don’t want to be afraid of what I don’t understand. I don’t really understand love or anything, and the feel is absolutely different between you and me. But for Jeanne, her love really exists, and no one has the right to hurt her. That’s why I don’t really know what “Jumbo” is. Kamo River is just public and not “friendly to everyone”. I’m wondering Jumbo is a “man” if Jeanne hasn’t defined its sex. 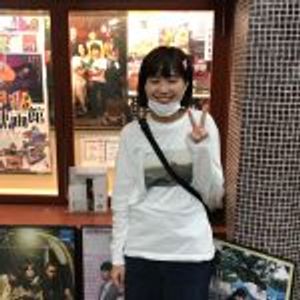 Film director, born in 1995 and graduated from Ritsumeikan University. She was nominated for the «21st Century Girl» (2018) open call for participants and directed «Projection». She won the 41st PFF for «The Wandering Plants» (2019). In her latest work, «The Sleeping Insect» (2019), she is self-distributed. Also works in a unit called Yankee in Chiang Mai. Twitter：@okomebroccoli
See Yurina Kaneko’s other articles