Along with criteria like product design, functionality, standards, and trends, the “Made in Japan” label has become an important consideration for selecting a product. In this series, Japan’s Brand Trivia, various creators introduce innovative made-in-Japan products that align with our concept of social mindfulness. This time, we spoke to Adrian Hogan, a Tokyo-based Australian illustrator whose work has appeared in various media. What are his thoughts regarding illustration, and how do products made in Japan influence and inspire his artwork?

——It’s been eight years since you’ve moved to Japan. What’ve you come to realize is distinctive about Japanese products?

Adrian Hogan (Adrian): Before coming to Japan, I had two stereotypes about “made in Japan” products: high quality and long-lasting. When I arrived in Japan, I felt like my impression was correct, but I remember being surprised by the scope and details of craftsmanship more than I had expected. The toothpicks at restaurants, for example, could be folded at the tip and placed like a chopstick rest, so they don’t directly touch the table. Restaurants also serve warm hand towels. People designed things with a specific use in mind, and they survived through the ages; that’s connected to the Japanese spirit of hospitality. I wanted to understand this way of thinking more, so I started studying Japanese. It’s been eight years since I started living in Tokyo, and I’m so glad I live here as far as having a creative life is concerned. It has an international business side, but Tokyo is also a city where you can live authentically. Even if you’re in an area with buildings, you can walk for a bit and still find traditional streets and factories. That juxtaposition is interesting.

——Where do you find Japan-made products and places that pique your interest?

Adrian: I’ve been walking around different neighborhoods since I first moved to Tokyo. It’s fun to see how your view changes after just five minutes of walking. I like the urban side of Tokyo, but I also like the countryside vibe of somewhere far from the city center, such as Higashimurayama. As I started observing the city, I became fascinated by things that have been used for a long time and have an aged feel. I used to think that if something became worn out, I could throw it away and buy something new, but now I understand the spirit of appreciating good, old things and fixing them to use them for a long time. I feel this way not only regarding objects but also in terms of buildings. I often draw pictures of such views. Tokyo has a lot of buildings with basic colors, but the people are stylish and wear many colors. I find the contrast between buildings and people interesting whenever I draw.

A small treasure for everyday use: Postalco pencil case

This is a Postalco pencil case I’ve been using for a long time. An American/Japanese married couple runs this brand. They design and sell functional, day-to-day stationery and leather products. They moved from America to Tokyo, and Japanese craftsmen make their products. They have an international feel, but it’s interesting because the products are made in Japan. I’m trying to do the illustration version of that. For example—a drawing you could live alongside. I want to draw illustrations that people could love for a long time. Even if the colors fade away due to sunlight, I want it to have taste. In a sense, Postalco’s approach and concept towards craftsmanship is an example and senpai. Also, when someone from abroad wants to buy my drawings, I write “Made in Japan” on the packaging because I think my work is, in a way, made in Japan. It might be strange for a foreign illustrator to make something in Japan, but I think the definition fits.

A brush pen with a nice touch and distinct wabisabi

When I first came to Japan, I used to draw with brush pens without knowing the significance of each color. You can alter the color saturation and pen strokes when you’re out of ink. You can draw fine lines by adjusting how hard you press. Above all, they’re available at convenience stores and are cheap. I enjoy using them. There are many drawings that I wouldn’t have been able to draw if I hadn’t found this brush when I came to Japan. I also draw with several calligraphy brushes, from thin to thick. Now, you can produce this texture with digital tools, but I prefer an analog, so I sometimes scan and overlay my digital drawings with drawings I made with brush pens. I use this method according to the spirit of “made in Japan,” where things made by hand are considered perfect. Also, when I draw portraits, it’s not about the likeness but about the personality and individuality of the person that hand-drawn drawings bring out. It’s what makes my work original.

A cafe for people to connect through drawing

When I was starting out as an illustrator, I thought it would be better to draw outside rather than at home because I like drawing people. I sketched on trains, on walks around the city, and in cafes in various cities. Even when I draw in the same spot at the cafes I go to often, I always find something different. No two pictures are the same. My favorite cafe right now is Parlors, located under a working space. I meet a lot of people by chance there. When I was drawing, one of the staff asked me if I was an illustrator and then introduced me to an art director who happened to be there, which led to work. It’s a place where communication leads to opportunities like that. These days, people quickly take pictures with their iPhones, but I want to sketch the moment. As a habit, I always keep a small sketchbook in my pocket to preserve happy moments and many memories. When I look back at my sketches, I often feel that everyday moments can be turned into art. I naturally learned about Japanese customs and manners, like how to hand a business card or the angle of a bow, from the sketches I drew.

Adrian Hogan
A freelance illustrator from Australia, who moved to Tokyo in 2013. Adrian Hogan draws for many media like magazines, advertisements, books, murals, and such, in and out of the country. He’s garnered a following on social media thanks to his daily sketches.
Instagram：@adehogan
http://www.adrianhogan.com/ 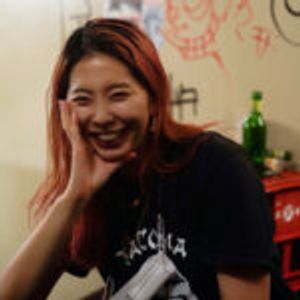 Editor and writer.After working for MATOI PUBLISHING, which produced "M girl" and "QUOTATION", she became independent. Currently, she focuses on editing, writing, planning content for fashion brands and companies, copywriting, and commercial production. He also considers communication planning and community building as a part of editing and media, and is working on a wide range of activities. Instagram：@maiokuhara39
See Mai Okuhara’s other articles