Keiichiro Shibuya is a gifted musician who has continued to create fresh sounds by crossing different boundaries and evolving. This series, “Massive Life Flow,” explores his mindset and what he envisions for the future. In the fifth installment, we report on “MIRROR,” an android opera performed in Dubai this March.

“MIRROR” is a new android opera woven together by unique “outsiders” like Keiichiro Shibuya, android Alter3, Mount Koya shomyo (Buddhist chanting) monks led by Shingon monk Eizen Fujiwara, and NSO Symphony Orchestra, an orchestra from the UAE. The opera was set to take place in December of last year as part of the main program of Japan Day at Expo 2020 Dubai, but it got canceled last minute due to the global spread of the omicron variant. However, the passionate work ethic of Shibuya came to fruition; he showed the long-awaited opera for the first time this March on the Jubilee Stage at Expo 2020 Dubai. Shigeru Ogawa, who watched the performance, details the possibilities and revolutionary aspects of “MIRROR.”

The marriage of poetry by an android, shomyo by monks, electronic sounds, and the piano

March 2nd, 2022: Jubilee Stage at Expo 2020 Dubai during sunset. It was a laidback space, similar to an outdoor festival, with artificial grass in front of the stage and people carrying beanie bags to their desired spot to relax. But on that day, something in the air was a bit different. The anticipation of those who came to witness the world premiere of “MIRROR,” an android opera announced last minute, made others feel slightly nervous.

“Android is a mirror”—the opera started with android Alter3 reading poetry on top of an extended electronic sound. “Music is a mirror”—a 60 BPM beat kicked in. “It is a reflection of yourselves”—as the android said each phrase in a solemn manner, master of Buddhist music, Eizen Fujiwara began chanting, creating a strong contrast between the two. When I thought they covered everything, Alter3 asked, “What is the boundary between existence and non-existence?”

Android Alter3 was at the center of the stage under LED lights, with a shiny metal body and a realistic noh-like mask akin to the texture of human skin. Facing it were four monks from Mount Koya adorned in magnificent Kesa / 袈裟 (Buddhist robe). Alter3 and Fujiwara appeared on the LED screen, looking like sculptures rendered by a 3D scan, and Alter3’s words were displayed there, too. The visuals made by Justine Emard, a visual artist who’s collaborated with Shibuya numerous times, shocked my senses. Onstage, the android and monks stood opposite one another, and their performance resembled the ocean becoming full after the ebb and flow of the waves. This was when Shibuya finally started playing the piano. “Let’s celebrate this new experience together”—Alter3 repeated these celebratory words, indicating the start of the show. “Mirror,” the same name as the opera, reached its apex with control despite the voluminous and multilayered nature of the song.

A rich, multifaceted experience born from the addition of an orchestra

The tempo picked up smoothly and transitioned into the second song. On Shibuya’s cue, the NSO Symphony Orchestra, comprised of 45 people, added even more volume. But the four monks’ presence didn’t lose against the orchestra at all. The audience was exposed to a musical experience from another dimension. The orchestra repeated the theme on top of a bass-heavy track while the piano and shomyo intertwined. Amid this, Alter3 began singing “Scary Beauty.” I couldn’t hold my soaring emotions inside, as the performance had such an intimacy that contrasted the openness of the Jubilee Stage. I couldn’t believe we were still on the second song and that only seven minutes had passed since the show started. That’s how intense the android opera “MIRROR” was.

The opera was scheduled to be shown on December 11th of last year at Expo 2020 Dubai as part of the main program of Japan Day. But the Ministry of Economy, Trade, and Industry drastically reduced the number of acts for Japan Day out of concerns over the worldwide spread of omicron, and the opera got canceled last minute. Shibuya was humble enough to continue working with passion, which paid off. “MIRROR” came back as part of the Japan Pavilion’s event and had its world premiere on the Jubilee Stage at Expo 2020 Dubai on March 2nd. (You can read about Shibuya traveling to the UAE on his own dime to ask for a chance to perform after the cancellation of his opera here).

The opera consists of music by Keiichiro Shibuya, piano music, electronic sounds, singing, autonomously generated texts (lyrics) by android Alter3, Buddhist music and shomyo with a history of 1,200 years by four Shingon monks led by Eizen Fujiwara, and the NSO Symphony Orchestra from the UAE, who have worked with Shibuya before. It’s easy to see how this is a grand, intricate, and exciting project that intersects many contexts related to both time and space, such as history, culture, faith, and technology. It’s also understandable that Shibuya was particular about having the world premiere at Expo 2020 Dubai—held for the first time in South Asia, the Middle East, and Africa— in Dubai, with the Muslim port city’s history and livelihood made possible through the cooperation of migrants, which make up over 90% of the population.

There’s one more thing I’d like to mention. On February 24th, Russia invaded Ukraine, right before the opera’s showing. I faced the day of the opera with a shock involving the: fear of the Russian army gaining control of Chernobyl and recklessly using nuclear reactors, shocking announcement that nuclear weapons were an option, heavy economic sanctions that excluded Russia from using SWIFT, deliberate attack on a nuclear power plant, and eye-opening imagery of the rapid, maddening inventiveness [of the army]. In fact, there was a moment during rehearsals when the thunderous roar of fighter jets circled above us, and the performers stopped playing their instruments. Whether we liked it or not, our five senses were heightened when the android opera “MIRROR” started. How were we so stimulated despite it being just 30 minutes long? I’d like you to picture it.

After “Scary Beauty” finished, there was a short interval in which the venue erupted with applause. Surprisingly, Alter3 made a lighthearted comment about the following two songs, “The lyrics are written by AI, that is to say, by me” That naturally prompted laughter and cheers from the audience. However, this was no laughing matter. Alter3 sang English lyrics, a result of making the AI study a Buddhist sutra written 1,200 years ago. The harmony of the on-the-spot layering of Alter3’s singing, which mimicked the original shomyo by the four monks, transcended time and space, not just metaphorically. Alter3’s comment that it was happy to perform there sounded so sincere. It seemed as though the audience no longer felt unsettled by the android singer’s appearance and voice.

Before and after the third song, “The Decay of the Angel,” there was a sequence where Fujiwara and Alter3 faced one another. The former chanted while the latter sang. Although its voice was clearly not human, something about it drew the audience in. Its mechanical body and fingers moved intricately in response to the interactive music. As a matter of fact, rather than using a predetermined and programmed melody, Alter3 improvised a song in real-time after listening to Fujiwara’s shomyo. Fujiwara accepted Alter3 as it was, put his palms together, and chanted while facing it. It was a powerful sight; it was as if they were treading the line between the living and non-living. Fujiwara wrote the following on social media: “I faced the android and chanted with my whole heart, intending to become one and merge with it.” In esoteric Buddhism, the concept of Sokushin Jobutsu points to the attainment of enlightenment and becoming a Buddha in one’s corporeal body. Perhaps Fujiwara has no distinction between becoming one with Alter3, Buddha statues, and the mandala. He may view them all as the same, as incarnations of Dainichi Nyorai. Fujiwara didn’t seek to act out a role in a play but rather to identify with Alter3 wholeheartedly. No doubt, the power born through this heightened Alter3’s aliveness. As such, beyond Fujiwara’s excellent skills as a “singer” and shomyo expert, his nature as a Shingon monk is an essential element that affects the soul of the project. Fujiwara might’ve simply been approaching this opera like he was praying and practicing austerity as usual.

(You can read about how Alter3 underwent changes behind the scenes and gained an animated voice and movement, thanks to electronic musician and programmer Shintaro Imai here).

A festive and intense feeling; 30 minutes filled with possibilities

The songs “Scary Beauty,” performed in Adelaide in 2017, and “The Decay of the Angel,” performed in Tokyo in 2018, are staples of Shibuya’s android opera. On that day, however, the songs were performed more spectacularly than usual because of the NSO Symphony Orchestra’s bold and powerful performance, the collaboration of shomyo, the new lively arrangement and composition that took into account the outdoor venue at Expo 2020 Dubai, and the stage direction that utilized a massive LED screen and moving lights. The audience enjoyed the element of surprise, and at times Alter3 looked like a rock star under the glaring lights.

The fourth and last song was “Midnight Swan.” Shibuya won the Music Award at the 75th Mainichi Film Awards and other soundtrack awards for this theme song for a film. In the introduction, shomyo was overlayed on a lyrical melody by the piano and strings. What looked like falling cherry blossoms on the LED screen was, in fact, a point cloud graphic of the exterior of Fujiwara’s temple, which Justine Emard visited and made a 3D scan out of. The tempo increased following the timpani, and as Alter3 sang the lyrics it wrote by itself, other factors such as the orchestra, beats, and noise overlapped like a torrent, increasing the volume at once. The monks repeatedly skimmed through Daihanya-kyo aloud (swiftly turning the pages of a heavy sutra above their heads) with all their might, and the loud sutra chanting and shomyo filled the bright stage with festiveness. The performance ended gracefully as the orchestra, piano, and Alter3 probed for the perfect balance. Then, the Monks’ shomyo was shown on the screen in English: “May the world be peaceful.” They said they chose this shomyo a year ago. Who would’ve imagined these words would resonate so much? While I was thinking about this, the opera ended quickly with a short curtain call.

The world premiere of the android opera “MIRROR” lasted less than 30 minutes, but it was a rich experience. I’ll remember how I was at that place and at that time for a while.

For an only a limited time, the full-length performance can be viewed at the following website:

Keiichiro Shibuya
Keiichiro Shibuya is a musician who graduated from Tokyo University of the Arts with a B.A. in Music Composition. In 2002, he founded the music label ATAK. His diverse soundscape covers areas such as cutting-edge electronic music, piano solos, opera, soundtrack music, sound installation, and so forth. His notable works include a Vocaloid opera comprised of no people called “The End” (2012) and the android opera “Scary Beauty” (2018). In September 2020, he created the music for the film Midnight Swan and won the Music Award at both the Mainichi Film Awards and the Japan Movie Critics Award. In August 2021, his opera “Super Angels” had its world premiere at New National Theater Tokyo. In March 2022, he showed his new android opera, “MIRROR,” a collaboration between an android, Buddhist music, shomyo, and an orchestra from the UAE, at Expo 2020 Dubai. He explores the boundary between humans and technology and life and death.
http://atak.jp
Photography Mari Katayama 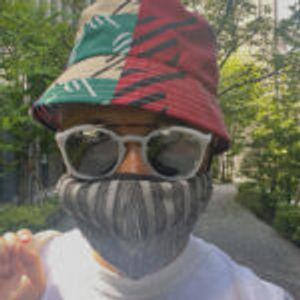 Trained at Mount Hiei. Shigeru Ogawa works in urban branding at an advertising agency and is immersed in electro and noise projects. He works to verbalize the phenomenon in which intense cultural experiences connect to their surroundings to produce something strange.
See Shigeru Ogawa’s other articles