More than 120 years ago, the custom of hajichi, a deep blue pattern tattooed on the back of women’s hands in Okinawa and the Ryukyu Islands, was banned by the Meiji government and gradually disappeared. Hajichi was the cultural heritage of the Ryukyu Kingdom, a rite of passage to mark the coming of age, marriage, and a talisman, which was desired by women. Lee Tonouchi, a fourth-generation Okinawan writer born and raised in Hawaiʻi, discusses the origins of Hawaiʻi Creole also known as Pidgin, as well as the diversity of the cultures in Hawaiʻi, and his own experience with hajichi.

“I no can imagine you live in NY. I haven’t been to New York since 2000, but it’s too cold during da winter, so I no tink I can ever live dea.” With a smile on his face, Lee Tonouchi, a writer based in Hawaiʻi donning an aloha shirt, started to speak. A fourth-generation Okinawan, who grew up in Hawaiʻi, wrote Okinawan Princess: Da Legend of Hajichi Tattoos (2019). He said he was motivated to write the book as his great-grandmother had hajichi tattoos on her hands.

One day, Tonouchi came across women with hajichi in a series of artworks he saw online about plantation laborers by Laura Kina, an illustrator based in Chicago. Kina’s father is a third-generation Okinawan and grew up in Hawaiʻi. At that time she was the only Okinawan-American artist who Tonouchi came across that was creating Okinawan-themed artwork. He decided to contact her and asked if she would be interested in working on the Okinawan Princess book project. Kina already knew Tonouchi’s work and agreed instantly.

That is how the journey to uncover the history of hajichi —the untold story of this disappearing artform—started. Kina visited Okinawa often and worked with Masashi Sakihara, who translated the Okinawan Princess into Okinawan and Japanese. They participated in many workshops and looked for books on hajichi in Japan at the local library. However, they could not get any conclusive pieces of information. Looking back, Tonouchi said, “At that time, ten years ago, it wuz next to impossible for find information about hajichi. Nowadays, we see more information out dea and it’s easier for do research.” He is glad to see the media coverage on hajichi. There was also an exhibition on the history of hajichi in Okinawa in 2019. The response to Okinawan Princess has exceeded expectations, and the book has already been reprinted. Tonouchi wished that he could share all of this with his late grandmother. “I tink she would have been very happy if I could’ve showed da book to her,” he said.

Tonouchi is a captivating speaker. The interview covered a wide range of topics, but the most entertaining story was about Mariko, a Okinawan-American woman who was originally from Hawaiʻi but living on the mainland who wanted to get hajichi after reading Okinawan Princess. The woman told the story of the Okinawan Princess to a Japanese-American tattoo artist and Tonouchi said, “Da artist felt guilty about what da Japanese did to da people in Okinawa and da disappearance of Hajichi culture. So, to make reparations he provided da tattoo to her fo free.” After telling this story with a serious face, Tonouchi added jokingly, “But he gave her a free hajichi for only one hand, cuz tattoos are expensive.” Tonouchi has a knack for telling serious stories with a sense of humor, and he is so charming that anyone who hears him speak for the first time will become a fan.

Living up to his nom de guerre, “Da Pidgin Guerrilla,” Tonouchi has published several books in Hawaiʻi Pidgin. Okinawan Princess was written in Hawaiʻi Pidgin, Uchinaaguchi (the Okinawan language), and Japanese. The goal was to keep the local languages alive. Unfair discrimination and prejudice against speakers of regional languages still exist. In Okinawan Princess, Pidgin scholar Kent Sakoda puts it this way, “By the 1920s Hawai’i Creole, or what locals still prefer to call Pidgin, became an everyday vernacular for a large part of the population with the accompanying effects of a fully developed vocabulary and grammar. However, the hegemony of English dictates that Pidgin continues to be a heavily stigmatized language mistakenly associated exclusively with working class or under-educated people. Ironically Pidgin speakers still face much prejudice and discrimination due to widespread ignorance by speakers themselves who refuse to see its value and worth furthering the possibility that Pidgin may one day soon become an endangered language.”

Bringing the standards of values from the mainland to Hawaiʻi, where the cultural origins are different, is somewhat analogous to the relationship between mainland Japan and Okinawa.

Among the everyday languages spoken on the main island of Okinawa, Uchinaaguchi has six major indigenous languages, and their usage varies from region to region. In Okinawan Princess, we are warned that the Ryukyuan languages are in danger of disappearing. Kina said, “Young Okinawans today speak Japanese and don’t learn their traditional language, while the Okinawan linguists take a cue from the Hawaiian language immersion programs and language revitalization movement among the native Hawaiians.” This implies that the steady work by Tonouchi and others is having a significant impact on keeping the Okinawan language alive.

Okinawan Princess traces the history of Okinawan hajichi and Hawaiʻi Pidgin, and its attempt to revive a vanishing culture. At the same time, contrasting the two histories and the present provides an opportunity to question the state of contemporary society.

Pidgin Hanabata combines words from Japanese and English. The appeal of the language lies in its diversity.

In 2015, Hawaiʻi Pidgin was recognized as an official language by the U.S. Census Bureau. Tonouchi used to be a teacher and has a master’s degree in English but had previously experienced discrimination as a Hawaiʻi Pidgin speaker. As a student, he was told that if he did not speak English, he would not be able to attend college or get a job. When asked about the changes in his life after the language was recognized as an official language, he replied, “I tink maybe get less prejudice now; in da 1980s, public schools wuz trying fo get Pidgin out. It’s similar to da dialect cards used in Okinawa. (The cards were used as punishment in schools throughout Okinawa to promote standard Japanese speech). While lotta people today see da importance of Pidgin to Hawaiʻi Local culture, Pidgin still get planny haters. Dey might be less vocal than before, but still get prejudice.”

Here is the difference between Hawaiʻi Pidgin and English: “Da kine” means “The kind” and “Howzit?” means “How is it?” In addition to the native Hawaiian language, there are immigrants whose mother tongues are English, Chinese, Korean, Japanese, Uchinaaguchi, Portuguese, Spanish, Tagalog, and other languages. When Tonouchi was a child, his grandmother told him, “Wipe dat hana-bata from your nose,” and he had to blow his nose. At the time, he thought she was speaking in Japanese, but later, when he became a researcher of Hawaiʻi Pidgin, he learned that “hana” meant “nose” in Japanese and “bata” meant “butter” in English. Tonouchi laughed and said, “Das how Pidgin wuz born and has been used.” Since his daughters are studying English in school, it is difficult to teach them Hawaiʻi Pidgin. He still remembers the first time his daughter spoke Hawaiʻi Pidgin. When she was young, she gave a drawing she made to his wife. So he asked his daughter, “What you wen draw for daddy?” She replied sassily, “Nah-tin“, which means “nothing.” Tonouchi accepts the reality that Hawaiʻi Pidgin might be slowly disappearing, but observes his daughters experiencing the Ryukyuan culture and language in the Hawaiʻi Okinawan community where they greet each other by saying “haisai (an Okinawan greeting).”

Regardless of whether it is in Japan or the United States, lifestyles and values among the younger generation are getting increasingly diversified, and the same is true for Okinawans in Hawaiʻi. Tonouchi describes the current conditions of how Uchinaaguchi stays alive. “When I wuz one child, small kid time, my grandparents listened fo Okinawan music in da house every day and it never occurred to me dat Uchinaaguchi was disappearing. Nowadays, while most Okinawans no longer speak Uchinaaguchi, get young people in Hawaiʻi like Brandon Ufugusuku Ing who are teaching em today. In da past, da only way fo learn it wuz fo move to Okinawa.”

Aside from activities related to language education, there is also the Okinawan Festival, which attracts a large audience through dance and music by the younger generation. “When I wuz young I only saw old people playing traditional Okinawan music, so I thought it wuz something fo only da old people, but my daughters got interested in Okinawan culture cuz dey saw local high school kids from Hawaiʻi Okinawa Creative Arts doing Okinawan lion dancing at da event so they wanted to learn shishimai, and my younger daughter has even started learning da sanshin (Okinawan three-stringed instrument).”

Lastly, some say that food is a catalyst to learn about a country’s history and culture. Hawaii has a diverse food culture. Loco moco, acai bowls, and poke bowls have become very popular in New York City. Tonouchi writes articles on local food for those in the know in Hawaiʻi. He noted, “With da internet, there are a lot of young travelers out dea who know a lot, especially da Japanese!” He told me about a exciting new-ish food that not everyone knows about yet, the “Mochisada” by Hauoli Pastry. Da “Mochisada” is a hybrid of a fried, airy malasada, which came to Hawaii from Portugal, and mochi doughnuts, which are soft and slightly chewy like mochi. The diversity of Hawaiʻi’s food culture overlaps with the origins of the Pidgin culture that has evolved over the years.

Lee A Tonouchi
Tonouchi is a fourth-generation Okinawan born and raised in Hawaiʻi. As an author and editor, he is known as “Da Pidgin Guerrilla” and advocated for the legal recognition of Pidgin (Hawaiʻi Creole) as a language. He promotes the idea that Hawaiʻi Pidgin is appropriate for both creative and scholarly writing. He is the author of Significant Moments in da Life of Oriental Faddah and Son (2011), which won the 2013 Poetry/Prose Book Award from the Association for Asian American Studies. His children’s book, Okinawan Princess: Da Legend of Hajichi Tattoos, won the Skipping Stones Honor Award. His play Three Years Swim Club, for which he wrote the script, received critical acclaim from the Los Angeles Times.
Instagram：@pidginguerrilla 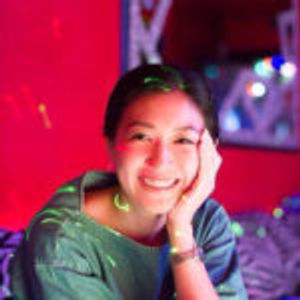