In early September, I returned home to New York City after a six-month stay in Japan. The flight from Haneda Airport to JFK Airport was probably about thirty-percent full. I was stopped at customs, but immigration check was empty and there was no airport quarantine. The fourteen-day home quarantine after traveling from Japan is also no longer required.

About six months after the state of emergency was declared in response to COVID-19, New York is past its peak of infection and the rate of positive tests has dropped to less than one percent. While we’re all wary of another wave in the fall and winter, perhaps it’s possible to say that the worst is behind us. I can’t detail the full course of events because I’ve been away for so long. But when I think back to six months ago, when the city was panicking as if the world were ending, things seem much more peaceful now. The streets are decidedly quiet.

In the morning, there used to be a huge traffic jam of trucks on the main street. In the afternoon, a mix of students commuting to the nearby university and tourists holding guidebooks. And at night, a chorus of merry pub-goers drinking until dawn, taxi drivers shouting at each other, and police car sirens. It was normally a noisy place to live, but all of this has suddenly come to a halt and gone quiet. With less crowds, every day resembles the quiet of Thanksgiving (Close enough to New Year’s Holidays in Japan.).

Outside of one school’s dorms, there’s a notice announcing that all buildings are closed due to a coronavirus infection. In front of the train station, an elegant office building, the kind with a receptionist permanently stationed, has all the lights off and a plywood board seals up the glass entrance. I wonder if they’d put this up when the BLM protests of this past spring had intensified, and then left it there. Even if you think about how everyone who used to work in this building now works from home, that’s already a huge number of people who have disappeared from the streets.

Not to say a ghost town, but to those who know how much energy used to exist here, the whole city appears to be half-asleep. Restaurants aren’t allowed to seat diners indoors, so all of them have set up outdoor seating under awnings on public streets for the time being. While coffee and sandwich shops may be able to get by with take-out orders, bars and restaurants will continue to struggle in this business climate.

Speaking of which, I’m writing this article from an outdoor table at Kindred, a restaurant in the East Village. It’s the sister-restaurant of Ruffian, a very popular wine bar in the same neighborhood, and it just opened at the end of last year. Originally, it was only open for weekday dinners and weekend brunch, but they recently started a new service called “Work From Kindred,” where people who are tired of working from home can rent a table to work at.

From 8 AM to 4 PM, Monday through Friday, you can get an outdoor table by making reservations online. This comes with free charging stations and Wi-Fi, as well as free refreshments. There’s a separate menu for a simple breakfast and lunch, and you can order a glass of wine or go straight into happy hour in the afternoon. It costs about $25 (about 2,620 yen) for half a day. Incomparable with any other services like coffee shops, but it’s not so bad to support our neighbors face-to-face, not only donating remotely from home.

One day in mid-September, I arrived at the restaurant a little after 9 AM. There were two groups of customers already sitting outside, where there are around ten seats. However, a waiter asked me if I’d made a reservation in advance and told me the restaurant would basically be full for the rest of the day. I was surprised; the service must have only started a few days ago. I didn’t think it would be so crowded already! As a regular customer, I managed to get a table in the corner.

The tables spill over onto the streets, and even with a partition, it’s hard to ignore the cars and bicycles that whizz past. But since I’m wearing a mask, the exhaust fumes don’t bother me too much. In the morning the temperature is 17 degrees Celsius, which rises to 25 degrees during the day. It’s sunny with a breeze, so I need a jacket but I’m not sweating. It’s the best time of year here.

In another month, I won’t be able to go outside without a coat or scarf. My apartment doesn’t have a yard, or even a veranda or a balcony, so I’m grateful just to be able to bask in the sun at this time of year. I can’t afford to pay $25 every day, but as long as I get to work in style and reset my mood once in a while, I guess I’m okay with it.

At the table next to mine, placed a reasonable distance away, two women sit together. It seems that they aren’t co-workers, but friends working different jobs. It’s a new “shared office” in this new way of life. They order today’s lunch, an open focaccia sandwich and a chickpea salad, even pairing it with a glass of rosé. “Yay!” they exclaim, and thus begins a social media photoshoot. And yes, I did exactly the same thing–although my drink was water.

I should note here that I’m the author of the book, “Eavesdropping Between Heaven and Hell” (Kinobooks), a collection of overheard conversations at restaurants. I eavesdrop on their conversation, aware that it’s rude but justifying it to myself as part of my work. I hear the women gush, “Such a memorable moment!” To sit outdoors on the street, this time of year, drinking wine and working together. It’s a memory we won’t forget! Really! They say happily to each other.

This feels like the biggest change in the half year that I’ve been away from this city. In March of this year, everyone was terrified of this unprecedented health crisis with no clear end in sight. People looked at each other and lamented, deeply and seriously, that life as we knew it would never return. While the future remains unpredictable with a serious health crisis caused by a mysterious infectious disease, I’m glad to see a little optimism returning to this city.

New Yorkers love new things. They want to go to new stores before anyone else, witness events they’ve never seen, and experience different cultures they don’t yet know. Next summer, there’ll probably be something else that happens. But for now, it’s the best time of year, in 2020, a year that we’ll never get back again. Let’s do our best to enjoy ourselves in a way we never have before. In a city where laughter is returning, I have a feeling we can get through anything 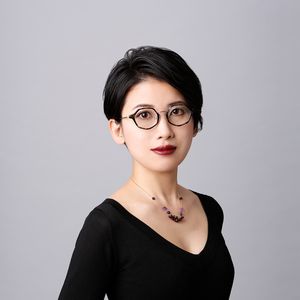 Writer. Born, raised, and worked as an editor in Tokyo. Since 2014, Iku has authored narrative essays in Japanese, such as "What I've Quit Before 40" or "Eavesdropping Between Heaven And Hell". Some of them were also translated and published in other Asian countries. Graduated from Parsons School Of Design in 2017, she keeps writing based in New York City, also working as a graphic designer and self-publisher. https://instagram.com/okadaic
See Iku Okada’s other articles