Daijiro Morohoshi is a manga genius who has produced many masterpiece manga with extraordinary imagination, drawing on ancient history, myths, and folklore. The world of cross-disciplinary ingenious works such as The “Youkai Hunter” series (1974-), where heretical archaeologists encounter bizarre phenomena and incidents in various parts of Japan, and “Mad Men” (1975-82), which depicts the intersection of modern civilization and the mythical world in Papua New Guinea, continues to attract a large number of readers over time. A large-scale traveling exhibition “Door to Another World” is being held to commemorate the 50th anniversary of Morohoshi’s debut (currently being held at the Mitaka City Gallery of Art in Tokyo, until 10/10). Taking this opportunity, we asked Mamoru Goto, an “Ankoku” critic, to contribute an essay on Morohoshi to shed light on the profound world of his works from a new angle. In this article, Goto deals with a bunch of works set in China such as the fantastical adventure manga “Saiyu- Youenden:The Monkey King and other Chinese Legends”(1983) created based on classic Chinese novel “Saiyuuki”. Using its link to Tatsuhiko Shibusawa as a clue, he goes into the profundity of Mannerism aesthetics of Morohoshi’s works.

Did you know a lot of works of Shibusawa Tatsuhiko are now being translated into Chinese and Shibusawa himself has become widely known as “Dark Aesthetics Master” in China? I myself am deeply moved by the fact that “Draconia” Shibusawa has finally returned to China, the land of dragons (Note from translator: the term “Draconia” was coined by Shibusawa himself to refer to the genre or territories of Shibusawa). The reason why I started with a seemingly irrelevant story is that there is a character called “Tatsuhiko Shibukawa” who claims to be a “philosopher on the street” in Daijiro Morohoshi’s early work Yume Miru Kikai / Dreaming Machine (1974).

Morohoshi expressed a heightened interest in Shibusawa. In the manga on alchemy “Niku-Iro no Tanjyo / The Birth of Meat Color”, which was also released in 1974, the bookshelf of the mad scientist who worships Paracelsus is filled with titles that Shibusawa would love, like Huysmans’ À rebours and Eliphas Levi’s Dogme et rituel de la haute magie. Also, in the interview included in the special issue of Eureka featuring Morohoshi, he explicitly mentions that books of Shibusawa became a source of inspiration for his masterpiece “Seibutsu-Toshi /Biological City” released in 1974.

However, more than these superficial mentions, the extremely artificial way of formulating Morohoshi’s World that was created as a bricolage through a full use of a large number of books by a person who identified himself as being lazy while drawing folkloric fieldwork in the “Yokai Hunter” series, I would argue, is very similar to the way in which Shibusawa World was created. Although I simply described it as Shibusawa World, what’s at the root of it is probably a miniature-loving, indoor-playing kind of Mannerist aesthetics.

In 1974, that is a year when “Yume Miru Kikai / Dreaming Machine,” “Niku-Iro no Tanjyo /The Birth of Meat Color,” and “Seibutsu-Toshi / Biological City” were released, Kurumi no Nakano Sekai /The World in Walnuts (Seidosha),  which is considered to be the greatest work of Shibusawa Mannerism aesthetics, was published. As the name suggests, it is a book on the correlation of the so-called microcosmos and macrocosmos (coincidentia oppositorum), in which the maximum world is stored in a tiny walnut. This magical power of the young emperor who bookishly controls a microcosm on the desk also shares a common ground with “Anthropology of Armchairs” in J. Frazer’s The Golden Bough, which is technically consistent with the indoor way of being of Morohoshi’s dark folklore. As can be seen from the reference to Borges’s “The Library of Babel” in the “Shiori to Shimiko” series in which the daughter of a second-hand bookstore and the daughter of a new bookstore are central to the story, Morohoshi was arguably a labyrinth-type of human being who has shaped his character out of the accumulation of books.

Chinese-style microcosmos called “KOCHUTEN（壺中天）” and a strong influence from the Western art histories on it.

Morohoshi’s Shibusawa-like Mannerism taste is most prominent in a series of Chinese manga that is best exemplified by Saiyuu Youenden The first work I would like to take up is the second volume of the Shokaishii series (Futabasha Action Comics that consist of four volumes), “Kochuten”, which is a story about an another universe in a small pot. This Chinese-style microcosms called “Kochuten (壺中天)” seems to have captured not only Morohoshi’s interest but also Shibusawa’s friend, Suehiro Tanemura’s interest. He even named his book on Japanese literary history compiled through a perspective of Mannerism Kochuten-Kibun.

The “Sanzanzu/ the image of three holy mountains” included in the same book also deserves special mention as a variation of the Kochuten. A lumberjack discovers three (human-sized) strange rocks and a ball in which the word “Zhen（鎮）” is encapsulate in the mountains of Gangshu. The prefectural governor who took the ball to inform the emperor about it learned about the existence of strange rocks too, and when he went to see them, he liked them and had attendants bring them to the garden of his house. Those strange rocks emitted white steam on a humid day, which looks just like a white cloud floating over Senzan=holy mountains. The prefectural governor loved those rocks so much that he was not satisfied by just looking at them and even enchantedly stepped into the garden of stones. And when he noticed it, he was lost in the miniature world and was flying over the clouds in it.

When the prefectural governor reached the heavenly world, it was revealed that the three strange rocks were “Sanzanzu”, a three-dimensional reduced map of the three holy mountains, Horai, Eishu, and Houko, which turned out to be something Sekkyaku-Taisen had left behind on the ground. The depiction of the prefectural governor tripping from the three strange rocks (micro) in the garden to the towering Sansenzan (macro) was an exact variation of Kochuten. But what struck me most in this work was Sekkyaku-Taisen’s magician-liked exterous fingers that rolled three strange mountains (three-dimensional) and transformed them into illustrated handscrolls(two-dimensional) [figure].

This expression is close to the imagination or texture of Morohoshi’s favorite painter Salvador Dali’s painting, “Dali at the Age of Six When He Thought He Was a Girl Lifting the Skin of the Water to See the Dog Sleeping in the Shade of the Sea”(1950)[figure]. Drawing on Dali’s “skin of the sea”, it can be said that character in Morohoshi’s work picked up “the skin of stone”.

I suddenly mentioned Dali’s name here because I wanted to point out the fact that Morohoshi, who has been often associated with Japanese folklore and Chinese ancient narratives, was strongly influenced by the Western art histories. Especially in Shitsurakuen / Lost Paradise, there are explicit references on Bosch, Goya, De Chirico, and Dali. With that perspective in mind,  please take a look at the famous scene that depicts ascension in “Seimei no Ki / tree of life” (1976), an arguably one of the greatest Morohoshi manga about the hidden Christians in Tohoku  from that perspective, and an unexpected source of inspiration will be revealed.

In the 50th anniversary exhibition “Daijiro Morohoshi:Door to an another world”, this scene is shown and compared to Tintoretto’s “Ascension of Christ”. But to be clear, it is visually unconvincing to compare them alongside each other only under the theme of “weightlessness”, (even if Gustav Rene Hocke considers “floating” to be the greatest feature of Mannerist art). Rather, this scene seems to have been inspired by a composite image of Louis Boulanger’s “Round Dance of the Night Feast” and Alberto Martini’s “The Last Time of Hell”, which is introduced as a double-page spread in Hans Hofstätter’s book “Symbolism and fin de siècle Art” that was translated and published by Suehiro Tanemura in 1970, six years before Morohoshi’s work [images]. In terms of composition and the consecutiveness and lumpiness of the huge number of human beings and monstrous creatures, they are quite similar to the scenes in the “Seimei no Ki / Tree of Life” .

To return from the digression, let’s go back to the Chinese one. Lastly, I would like to take up the “facelessness” that most clearly shows Morohoshi’s Chinese style Mannerism. There was a faceless Shenxian called “Mumenmoku” who had been philosophizing since the beginning of the world in Tenkyu-Mountain. When other two  Shenxian appeared there, they drew a human face on Mumokumen’s face, he awakened to the human ego, became secular, came to have a desire for power, and eventually died. 【figure】

What should be noted here is the fact that Mumokumen’s real name is “chaos”. According to “Uchu Ran Kunlun no Nazo / The Mystery of the Cosmic Egg Kunlun”, a book of Masaya Takeda, a heretic Chinese literary writer, this manga is taken from the chaotic myths that appear in “Oteiou Hen.” of “Zhuangzi”. According to Takeda, the legendary mountains “kun-lun（崑崙）” and “Hum-Dun（混沌）”, which are the headstream of the Yellow River, belong to the same phonological group. And these two words are the cosmic terms that reminds us of the so-called “cosmic egg” that refers to the primitive unity that had existed prior to the birth of dualism triggered by a collapse of the chaos  led by Pangu（盤古）, the first human beings in Chinese mythology.

Apart from Takeda’s idea that Wonton (hun-tun) on a bowl of ramen is also a fragment of cosmic egg because it also belongs to this same phonological group, the phonological match of chaos (Hum-Dun) and egg human Humpty-Dumpty, regardless of the difference between the East and the West, is striking. The tragedy of egg-human who is irreversible if once broken corresponds exactly to the Chinese myth of Hum-Dun (Mumenmoku) in which the countdown for its destruction begins from the moment the facial features are written on the egg-shaped surface. Morohoshi’s Mannerism (the correspondence of microcosms and macrocosms ) that went through “Kochuten” and “Sanzanzu”, comes down to a longing for the space egg as an “image of the wholeness” (Eliade) in which the heavens and the earth or the yin and yang were still in harmony with each other. 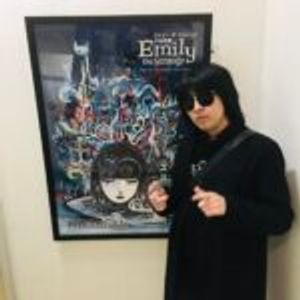 Mamoru Goto is an “Ankoku” critic. He has written Introduction to Gothic Culture (P-vine, 2019), Kokujin Kisou Ongakushi Meikyu to Kyoui (working title) (Chuokoron-Shinsha, planned to be out in 2021). Goto proofread the translated version of The Golden Bough (Kokusho Kankōkai). He contributes to Kinema Junpo, Eiga Hihou, Bungei, ele-king, and Asahi Shimbun and is also the chief editor of a Geistesgeschichte Organization. http://note.com/erring510  Twiiter: @pantryboy
See 後藤護’s other articles