Lovecraft Country is the title of HBO’s hit show, with Jordan Peele and JJ Abrams among the executive producers. Masaaki Kobayashi deciphers the series, interwoven with hip hop, Sci-fi, spoken word, and the complex intersections in Black history.

1. H. P. Lovecraft, and the origins of Lovecraft Country

Adapted by showrunner Misha Green, the HBO TV series Lovecraft Country is based on the 2016 book of the same name by a white writer called Matt Ruff. Stylized as H. P. Lovecraft, Howard Phillips Lovecraft often used “Lovecraft Country” as a setting in his stories. Fanfiction written by various writers has kept his tales alive and systematized over the years. More recently, Lovecraft’s fictional universe, the Cthulhu Mythos, has become even more prominent thanks to different games.

At the very root of Lovecraftian stories, often referred to as “Cosmic horror,” is the notion that human beings are nothing but a tiny speck in the vast universe. This involves such beings getting lost in an unfamiliar place or another dimension in Lovecraft country, encountering things beyond human understanding, and feeling tormented by the unbearable weight of loneliness and powerlessness in the face of fear. The only published book he saw during his lifetime was The Shadow over Innsmouth, rife with blatant displays of racism and xenophobia. In an ideal world, I’d say that he wanted to show how such fears cause people to alienate those that are foreign to them. In reality, Lovecraft’s mental state was unstable, and he had discriminatory beliefs, as seen in his personal letters in the TV series.

If you read his work knowing this, you’ll realize how Black people have no power in his realm. Lovecraft’s primary setting is a fictional place in New England during the 1920s. In the southern states, local and state-level racial segregation laws, known as Jim Crow, were in effect for half a century at that point. Black people lived without the same privileges. They feared what white people could do to harm them. Meaning: everyday life was Cosmic horror itself.

There’s no doubt Matt Ruff regarded white America, where racism dominates, as Lovecraft country. Set in 1954, Atticus Turner (Atticus “Tic” Freeman in the TV adaptation) discovers his father is missing. He embarks on a journey to search for him with uncle George, who publishes a travel guide for Black people to navigate America (based on a real guidebook), and childhood friend Letitia (“Leti” in the TV adaptation). The three characters come across and investigate otherworldly mysteries surrounding Atticus’s ancestors.

2. Books that guide the plot

As a Black woman, Misha Green illustrates the Black experience with her adaptation of Ruff’s book. She also pays keen attention to Lovecraft’s work and other books by different authors.

Episode one opens with Tic running through the trenches of a battlefield in outer space. Soon, a red woman comes floating down from a flying saucer. They’re then faced with the famous Cthulhu monster, baring its many fangs and ready to devour the two. The first Black man to play in Major League Baseball, Jackie Robinson, rescues them just in time, defeating the monster with the swing of his bat. If this were one of the white characters from Lovecraft’s work, they would be at a loss. In this universe, however, Black heroes fight heads on.

… But this sequence is just a dream. Tic, who has returned from the Korean war, is a bookworm and has fallen asleep on the bus while reading A Princess of Mars by Edgar Rice Burroughs. Published in 1917, this Sci-fi/fantasy novel follows a confederate veteran from the Civil War called John Carter. After mysteriously being transported to Mars, he gets caught up in a conflict between green Martians and red Martians. Then, he falls in love with Dejah Thoris, a red Martian princess, while outside forces threaten them — and so the story goes. Green’s adaptation takes on this premise and adds a new twist to it.

Another monster from Cthulhu makes an appearance later on: Shoggoth, detailed in Lovecraft’s novella, At the Mountains of Madness. By the time it comes out and wreaks havoc, it’s clear that the real monster that terrorizes Black people is, in fact, white people, especially white police. On top of references to these books, close-up shots of other books play an integral role. From Tic picking up Lovecraft’s The Outsider at uncle George’s workplace to his father’s copy of Alexandre Dumas’s The Count of Monte Cristo left on his bed, they give the viewer a hint of what’s coming.

3. Figures from real life and Black history: the crossover of fiction and reality

Regardless of the era, Green effectively reinterprets words from real people, murder, fiction novels, music, films, and more, and incorporates them into the show. Let us look at how Green recreates the nonfictional past in several ways.

For instance, in the first episode, on their way to look for Tic’s father, Tic, uncle George, and Leti pass by a “Sundown Town” sign placed in a spot that’s hard to see, as they enter a town inhabited by only white people. It implies that if the residents saw Black people there after sunset, they would get arrested, or worse, — killed. As it’s known today, sundown towns existed, and they’re one form of Cosmic horror in the TV series. Another example is the set; part of the outdoor set is an homage to Gordon Parks’s authentic photographs of everyday Black people during the Jim Crow era.

She doesn’t stop there, however. She pushes for those that history textbooks try to erase. In the third episode, the show introduces a young Black boy who goes by Bobo. The nickname belongs to Emmett Till, the 14-year-old boy who was lynched brutally after being wrongly accused of flirting with Carolyn Bryant, a white woman, in 1955. This horrific case, and the truth about the victim, are so effortlessly integrated into the show that it’s hard to believe this part wasn’t in the original book.

Green sheds light on another tragedy: the Tulsa Race Massacre, 1921. What instigated it was similar to Emmett Till’s case. A young Black man named Dick Rowland was accused of assaulting Sarah Page, a white woman. Despite her not pressing charges, it spread across town like wildfire via a sensationalist newspaper report by the Tulsa Tribune. Upon hearing rumors of a lynching, a white mob gathered around the courthouse. In response, a group of Black men also gathered to protect him. What ensued was a standoff between the two groups. It then broke out into a shootout, which escalated to a full-on massacre. In Tulsa, there was a district known as Black Wall Street, the most affluent Black community at the time, but it burned down to the ground in two days. It had 75 to 300 casualties, 6,000 injuries, and 10,000 people who lost their homes. For a long time, American history textbooks virtually erased this tragedy.

The town of Tulsa was wiped out: this is a historical fact. And the anger and sadness surrounding this remains. In episode nine, the camera captures Leti walking through the town going up in flames, and in the background is a poem:

These lines are one part of the writer and activist Sonia Sanchez’s poem, “Catch the Fire” from 1995. The poem isn’t about Tulsa in particular, however. It’s about how generations and generations of Black people have overcome slavery, racism, and socioeconomic difficulties by having a passionate spirit that never ceases to burn. Both Sanchez and Leti direct their gaze at the entirety of Black history.

More words demand the viewer’s attention. The first episode includes James Baldwin’s speech about how the American dream didn’t apply to Black Americans (taken from a debate in 1965), and in the second episode, titled “Whitey on the Moon,” Gil Scott-Heron’s song of the same name plays. The song is about the hypocrisy of using large sums of money to send a white man to the moon while Black people down on earth still struggle with poverty. Also, the seventh episode features dialogue from Sun Ra’s film Space Is the Place.

In this episode, uncle George’s wife, Hippolyta, gets sucked into a different dimension and gets transported to a place that allows her to affirm her own identity, namely 1930s Paris, where she meets and talks to her idol Josephine Baker, the first Black woman to act in a major feature film. The woman who guides and encourages her in this alternate dimension is Seraphina AKA Beyond C’est. Even in a space that’s beyond the notion of space-time, Beyonce is the one who empowers others.

For those that face Cosmic horror in Lovecraft Country, such words are sources of empowerment, which gives them the strength to take action. No matter if it’s from the past or future, no matter how small or big. Moreover, Green took two primary men characters from the original book and rewrote them as women in the TV series. She also added another woman character. I had assumed that she was going to express their empowerment straightforwardly, but she brought it to another level altogether.

5. Hip hop in the 50s? A soundtrack unrestrained by time

Right from the get-go, the series throws surprise after surprise at the viewer. One element of that is music. Tic visits a bar named after Denmark Vesey, the person who planned a slave uprising that would’ve been the biggest one in American history, and Tierra Whack’s “Clones” plays in that scene. The 2019 song is a stark contrast against 1954, the year it’s set in, and that might throw some viewers off.

If you’ve seen the first episode of the TV series Underground (2016-2017), where Green worked as the co-showrunner, you would immediately understand her song choices. In the opening scene, an enslaved man runs away at midnight, with Kanye West’s “Black Skinhead” blasting in the background, emphasized by his breathing. As one could deduct from the title, it’s set on a plantation in Georgia in the late 1850s. The story isn’t cut off as something solely in the past. By using Kanye’s song (other contemporary artists are included too, such as The Weeknd), it brings many problems from that time to the present day.

In some moments of Lovecraft Country, it seems like the soundtrack is pushed to the limit. Far from hesitating, the show uses not one but two Cardi B songs in episode five. 2017 hit-song “Bodak Yellow” plays in the background of one scene. The line “These is red bottoms/These is bloody shoes” expresses dominance over a rival from the eyes of a rapper. But in this scene, it takes on a literal meaning, although the bloody heel itself isn’t shown explicitly on screen. Nevertheless, the viewer could easily imagine it while also appreciating the overt feminist tone in the sequence. 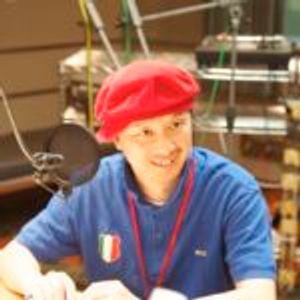 Masaaki Kobayashi has written the book, Mixtape Bunkaron (Shinko Music Entertainment, 2018) and has translated The Rap Year Book, written by Shea Serrano (DU Books, 2017). He has announced that he’s going to publish a book on Childish Gambino/Donald Glover’s body of work, which will include the expansion of this article, and an in-depth study into Black Mirror, as seen in Beyond Netflix (DU Books, 2019).
See Masaaki Kobayashi’s other articles